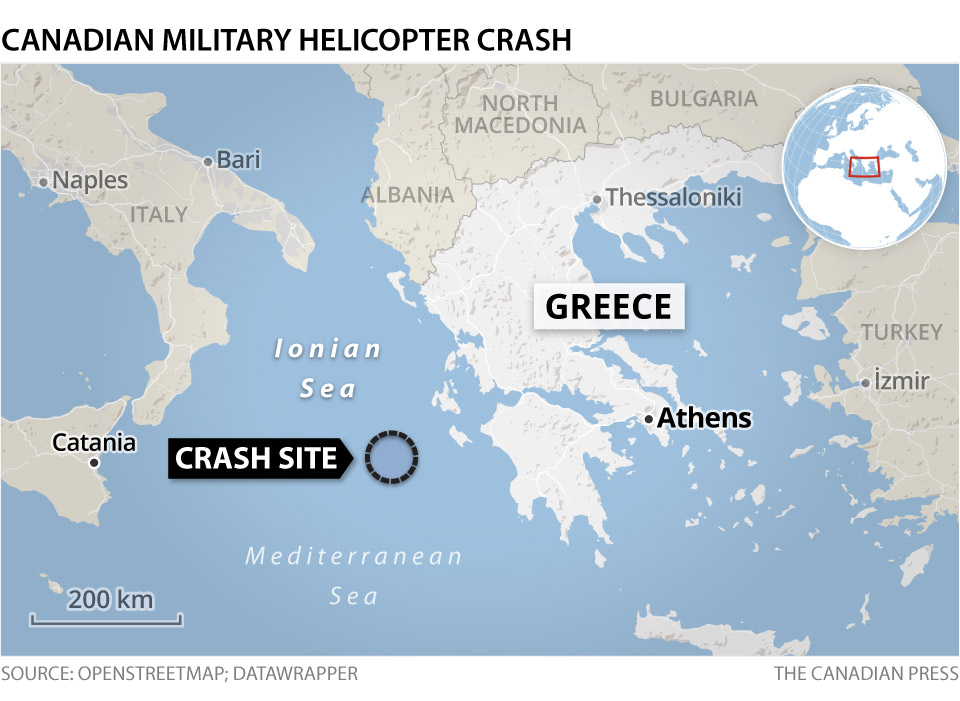 OTTAWA - The Canadian military is deploying a flight investigation team to determine the cause of a helicopter crash off the coast of Greece that has claimed the life of at least one service member and left five others missing.

Prime Minister Justin Trudeau said during a news conference that six people were aboard the Cyclone helicopter that went down in the Ionian Sea on Wednesday as the aircraft was returning to the Halifax-based frigate HMCS Fredericton from a NATO training mission.

"They are all heroes," Trudeau said Thursday. "On behalf of all Canadians, I would like to offer my support to the family and friends and to the members of the Canadian Armed Forces, to the people of Halifax and to the people of Nova Scotia. We are with you."

Chief of the defence staff Gen. Jonathan Vance confirmed the body of one sailor, Sub-Lt. Abbigail Cowbrough of Nova Scotia, had been recovered. Canadian and allied warships and aircraft were searching for the other service members.

They were identified as:

While search conditions in the area were good, military officials said the helicopter's having crashed in water that is 3,000 metres deep and the size of the debris field complicate the effort to find the missing.

"Even in relatively calm conditions, very small objects in the water are very difficult to find over long periods of time especially as wind and current expands the search area," Rear Admiral Craig Baines, commander of the Navy's Atlantic forces, said during a briefing in Halifax.

"But they are continuing, and they will continue to search while they believe there is still an opportunity to find survivors."

Defence Minister Harjit Sajjan said the Cyclone's flight-data and voice recorders have been recovered after they broke away from the helicopter when it crashed and will soon be returned to Canada for analysis.

A representative from Sikorsky Aircraft, which builds the Cyclone, is also going to the scene following a request from the military, alongside the Armed Forces' own investigative team.

The military has imposed what Vance described as an "operational pause" on the rest of the military's Cyclone fleet in case the crash was caused by a fleet-wide problem with the helicopters. The Royal Canadian Air Force has 17 other Cyclones.

Both Vance and Sajjan on Thursday defended the Cyclones, which the military has only been using on real missions since late 2018 after more than a decade of developmental challenges, delays and cost overruns. The Cyclones replaced the military's ancient Sea Kings.

"It is an absolute superb aircraft and you know that it's good when the crews and pilots themselves are talking about the actual capability that it's providing," Sajjan said. "Nonetheless, we will conduct a very thorough investigation to get to the bottom of this, like we do with any case."

Col. James Hawthorne, the commander of 12 Wing Shearwater where the Cyclone was normally based, echoed that sentiment.

"I do not have any safety concerns at the moment," he said during the briefing in Halifax. "However, the director of the flight safety investigation will determine exactly what happened as they conduct their investigation and we will move forward at this point."

Hours before the news conference, Cowbrough's father Shane identified his daughter as having been killed in the crash.

"I am broken and gutted," he wrote on Facebook.

"Today I lost my oldest daughter Abbigail Cowbrough in the crash involving the Cyclone from HMCS Fredericton. There are no words. You made me forever proud. I will love you always, and miss you in every moment. You are the bright light in my life taken far too soon."

Josianne Garrioch, of Gatineau, Que., was a best friend of Cowbrough, who was a bridesmaid at Garrioch's wedding.

"She was a really charismatic and bubbly person, and just somebody you wanted to be around all the time," Garrioch said. "She was really loving and no matter what you did you always felt safe talking to her."

"We sort of bonded over our shared love of the music and the dance," Garrioch said.

HMCS Fredericton left its home port of Halifax with the Cyclone for a six-month deployment to Europe in January as part of a NATO task force charged with patrolling the Mediterranean and Black seas and guarding against Russian aggression.

While the navy has recalled several of its warships due to COVID-19, the Fredericton has continued its mission. In an interview with The Canadian Press, Sajjan left the door open to the Fredericton pressing ahead despite the Cyclone crash.

"We don't want to get ahead of ourselves, but we want to get back onto the mission as soon as it is appropriate to do so," Sajjan said.

"We would like to resume the mission as quickly as possible because that's what our troops do. Even at a time of absolute tragedy like this, they have a job to do. They're absolute professionals and even during a crisis like this, they will continue that mission."

The military is preparing to send an extra padre and social workers to help those on board the Fredericton alongside the investigation team, said Baines, who described the crash as "an absolutely horrific event."

"The ship's company is doing well, but of course it's a very traumatic situation as they continue the search for survivors."

While Cowbrough was not a normal member of the Cyclone crew, Vance said she was authorized to be on the helicopter. Cyclones normally contain a crew of four, including two pilots, one tactical operator and a sensor operator. They have room for two passengers.

The helicopter, codenamed "Stalker," took off around 4:35 p.m. local time as part of a training exercise involving the Fredericton as well as Italian and Turkish warships, Vance said. It was returning when the ship lost contact with it at 6:52 p.m.

Vance would not say whether there was any mayday call before it disappeared.

This report by The Canadian Press was first published April 30, 2020.

—With files from Keith Doucette in Halifax

The Free Press will close this commenting platform at noon on July 14.

We want to thank those who have shared their views over the years as part of this reader engagement initiative.

In the coming weeks, the Free Press will announce new opportunities for readers to share their thoughts and to engage with our staff and each other.

You can comment on most stories on The Brandon Sun website. You can also agree or disagree with other comments. All you need to do is be a Winnipeg Free Press print or digital subscriber to join the conversation and give your feedback.

Comments are open to The Brandon Sun print or digital subscribers only. why?

Comments are open to The Brandon Sun Subscribers only. why?

By submitting your comment, you agree to abide by our Community Standards and Moderation Policy. These guidelines were revised effective February 27, 2019. Have a question about our comment forum? Check our frequently asked questions.